Last week in the financial markets

· Worries that Britain is at risk of deflation grew after the annual rate of inflation fell to 0.2% in August, down from 1% the previous month

· Oracle confirmed that it is ByteDance’s preferred American partner for TikTok. The impending deal comes after Mr Trump insisted that TikTok’s American arm be divested by ByteDance, the Chinese owner of the short-video platform, due to worries about national security.

· JPMorgan Chase & Co. is poised to pay close to $1 billion to resolve market manipulation investigations by U.S. authorities into its trading of metals futures and Treasury securities, according to three people with knowledge of the matter.

Driving forces for the week ahead

Why covid-19 will make killing zombie firms off harder

The development of the global pandemic has resulted in the emergence of a hoard of companies which are neither profitable nor condemned to liquidation or takeover. Such “zombies” stalk the business landscape. They are bad news for the economy. And many more firms are in danger of being zombified during the Covid-19 downturn around the world. Although zombies are nothing new, they have gained ground since their first real emergence in Japan’s famous “lost decade” in the 1990s. The Economist reports that according to the Bank for International Settlements (bis), a club of central banks, nearly one in six listed firms in rich countries could be classified as a zombie in the run-up to the pandemic, up from around one in 20 in the 1980s (see Chart 1).

The reason for this emergence maybe, indirectly, the result of loose monetary policy: lending money to a poor prospect is less painful if the bank pays little in funding costs. Banks with weak balance-sheets—often the result of low profitability itself linked to low-interest rates—are more prone to backing zombies. Extending new loans and pretending they will be repaid avoids recognising losses, at the risk of compounding them. 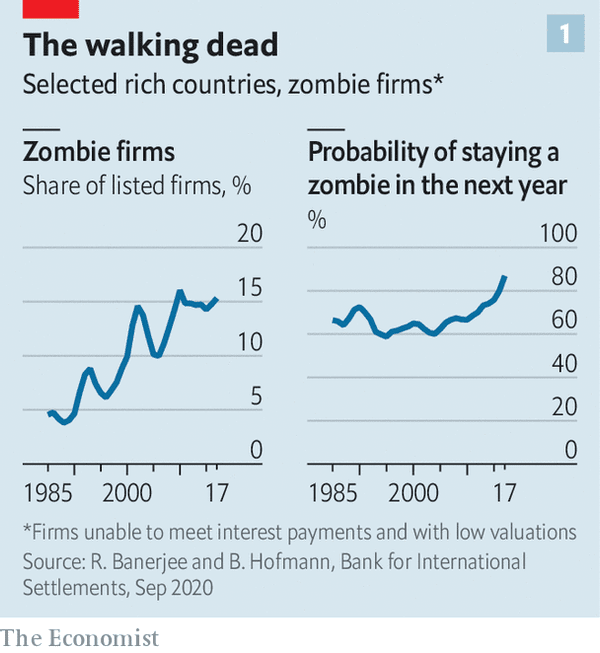 The problem with such an environment is that as fewer firms exit markets, fewer firms are being created. Employees are moving less, despite technology making it easier for them to find new jobs. Overall, studies suggest that zombification hurts economic dynamism in several ways and zombified businesses are also found to invest and innovate less than non-zombies. Another problem is that such zombies also seem to “crowd out” non zombies, Economists at the OECD have found that productive firms in industries with zombies find it harder to attract capital. Margins at non-zombies are undercut by firms content to make no return on their investments and therefore healthy firms invest less as a result which results in less productivity growth.

In general, the two main conditions for further zombification are: companies’ easier access to credit; and governments’ attempts to freeze the economy in place during the pandemic. Furlough schemes that cover wage bills and state-backed loans that provide liquidity enable unprofitable firms to keep going.

As the Economist writes, in horror films, finishing off a zombie is a gory affair. The same is likely to be true in business- given the lessons learnt from 2007-09 where fragile banks did little to kill off zombies and a rise in interest rates in the developed world being far away.

What else we’re reading

· Will US jobs growth continue to weaken?

· Why Covid-19 will make killing zombie firms off harder

END_OF_DOCUMENT_TOKEN_TO_BE_REPLACED

US elections, their impact on the US market and more…